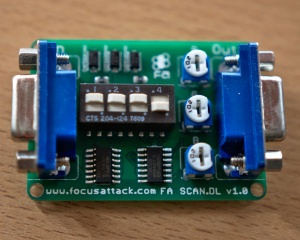 SCAN.DL is a VGA scanline generator sold by focusattack.com. The goal is to somewhat mimick the look of a CRT screen on LCDs. It is sold as just a PCB with no case.

It is not an upscaler or converter - it only adds scanlines. It does not require it's own power supply.

While it seems the product is meant for Arcade cabinets (especially Mame cabs) that are fitted with LCDs, I figured it should also work well for retro PC gaming where filters/shaders are not an option.

And indeed it does work very well for MS-DOS and Win9x games in typical resolutions (QVGA, VGA, SVGA etc.). The only inconvience is having to toggle DIP switch 3 depending on the resolution of the game. Some games also switch resolutions for cinematics, menu screens, bonus stages etc. In those cases there's a chance the current DIP switch 3 setting doesn't work for all modes used by the game. That only means there wouldn't be any scanlines in ie. cinematics, but they would be displayed fine during main gameplay.

It works up to FHD resolution and has a "fat scanlines" mode too, but scanlines are probably not as aesthetically pleasing in higher resolution 3D games anyways. Conveniently, the scanlines can be disabled completly via DIP switch 1.

Compared to the XRGB-mini FRAMEMEISTER, which doesn't directly support VGA, the SCAN.DL is cheaper, easier to use and the scanlines look similar. The SCAN.DL doesn't do any upscaling however. So if your display's integrated upscaler sucks, that can completly ruin it. Consider the OSSC instead. Obviously the SCAN.DL also won't work with anything that can't output VGA.